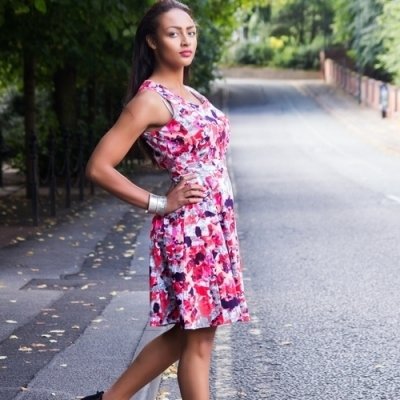 Busty girls have a very special set of problems. Going down the stairs is sometimes scary because you can't see over the swell of your breasts. Running and jumping are dangerous activities. When eating, you will likely end up with a treasure trove of crumbs down your bra. Buttons pop and bulge, coats and blazers don't fasten, and dresses never fit quite right. In fact, clothing is a huge issue for girls with large busts. There seems to be a distressing lack of fashionable options – but that's a niche that Kelly Roberts, the genius behind Bitter Lollipop, is filling admirably.

Bitter Lollipop is a line aimed at sartorially savvy girls with larger bust lines. When asked what led to its creation, Kelly gave an answer that probably rings true for many of you: “It was my own struggles to find clothes that fit which led me to come up with the idea for Bitter Lollipop. I was getting so frustrated when shopping and being unable to fit into anything properly. If something fit my bust, it was really loose over my waist and shoulders and made me look bigger than I am. I had seen many lingerie lines available for women with bigger busts, but only a handful of clothing lines and most were aimed at a customer older than myself. I wanted to create something that a woman in her 20s or 30s would want to wear.”

Sound familiar? Kelly understands the lollipop body shape (as you can see by the fiendishly clever name of the line), and actually began designing her fashions with that shape in mind. Having taught herself to knit and sew as a young girl, she turned her attention to design after acquiring undergrad degrees in Economics and Psychology. Her decision to start her own fashion line was born as she earned her Masters in International Fashion Business, and stylish young women the world over can now reap the benefits of that choice!

As a Chicago native who now lives in England, Kelly is extremely inspired by British style, which you can see in the colors, patterns, and silhouettes of her line. You'll find mod flair, easy elegance, and more than a few touches of that stellar UK street style. As the designer herself says, “Bitter Lollipop is aimed toward a fashion forward woman that also likes more timeless pieces that can be worn for years to come.” That versatility leads to a variety of dynamic day-to-night dresses that work well at the office, on campus, or out on the town. For example, Kelly suggests the Kate and Riley dresses for both work and cocktails after quitting time, while the Tiffany and Olivia dresses are perfect for parties. Put on Paige when you want an ideal base look and slip into Chloe when you're ready to paint the town red.

Bitter Lollipop's future is a bright one, with plans to expand into more formal and casual dresses, tops, jackets, and new sizes. So take a look, stalkers, and let us know: is Bitter Lollipop destined to be the new black?