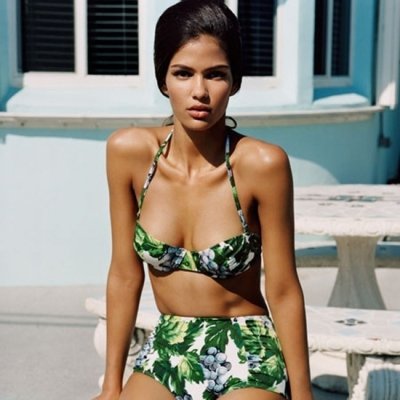 Underwear trends are fascinating. Yep, really. Fashion often reflects cultural norms and transitions – just imagine having to wear Victorian underwear today, or dressing in the Dark Ages in Victoria’s Secret! Here are some of the most bizarre underwear trends from the past 100 years – would you wear any of these today?

Crotchless underwear first became one of the first underwear trends back in the 1900’s. How crazy is that? Back then, it was more about convenience than sexiness, though. Baggy crotchless pants meant ladies didn’t have to strip off several layers of skirts and corsets before being able to use the toilet, whilst remaining discreet. They were often white and knee-length, with big ruffles. Probably not something that would be popular today!

Corsets were becoming a thing of the past by the 1920s. Waif-like, almost boyish figures were the fashion, so underwear needed to help maintain that slim, bulk-free figure. Cami knickers were perfect. These were full-body garments with spaghetti straps, elastic around the waist, and built-in shorts that ended half-way down the thigh. A daring outfit compared to the far longer underwear of the older generations! It’s no wonder they became a hit with flappers.

Miley Cyrus isn’t the only person loving high-waisted underwear. In the 40s, underwear was becoming much more recognizable. Cotton and nylon panties that covered the belly button but ended at the top of the legs was the trend, especially as they fitted snuggly under skirts and higher hemlines. This shorter underwear was especially important as women started working away from the home, so ease of movement was essential.

Girdles were relatively popular in the 40s, but they became huge in the 50s. The hourglass figure was all the rage, and to get one, most women needed a slimming, smoothing girdle. Most of them were hooked onto garters that held up stockings, too, which created that co-ordinated vintage look that we’re all so fond of. Imagine wearing a girdle every day, though! So much effort.

The 1960s were playful for underwear. Youth culture had become popular, and that’s evident in the new styles on display. While high-waisted pants stayed popular, gone were white undies. Instead, black, patterns and pastels became must-haves. The most popular style at the time? Underwear with the day of the week displayed on the front or back.

By the 1970s, high-waisted pants were on their way out. Low rise underwear became a must-have, and the playful styles of the 1960s grew up into lace and silk. Scalloping and details were underwear essentials, and bright pinks and oranges started to make an appearance. Underwear was definitely influenced by the 70s disco era!

You’ve probably seen celebs rocking high-legged bodysuits in old music videos. In the 80s, bodysuits were in their element, and po pstars like Cher were regularly photographed in them. Ultra-high-cut panties were huge, too – there were no covered up hip bones here! The higher the cut, the more racy the underwear.

Do you remember Sisquo’s “Thong Song”? Yep, that catchy tune set the underwear tone for the 2000s. Low-rise jeans were huge, and with them came a visible thong trend. You read that right – for a while, it was uber-stylish to have your thong pulled so high that you could see it above your jeans. At the same time, new underwear trends were brewing, most notably the boy shorts style which was championed by those who didn’t like thongs. Suggestive messages also started being featured on underwear, making cheeky underwear a must-have.

And after the racy slogans? Spanx. Yep, even our celebs are being snapped in Spanx that holds you in and shapes your figure, letting pretty much anyone wear pretty much anything.

Which underwear trends are your favourites? I’d love to rock a girter for a while, but I’m not so keen on those crotchless panties, or anything too high-waisted…and visible thongs is a fashion crime these days!