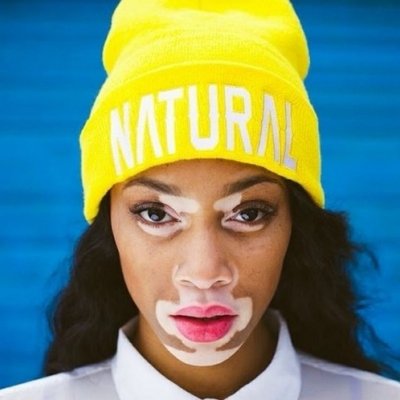 There was a time when a fashion model was more often than not described as "a young, pretty, long legged, skinny woman". But it seems like we're ushering in a new era where models don't always fit that description and it's oh-so-refreshing! Check out these fascinating and inspiring models who prove that there's nothing wrong with being different! In fact, being different is awesome!

This Canadian model hasn't let vitiligo stop her from following her dreams. She first appeared in America's Next Top Model's 21st cycle and has since worked for Desigual, Ashish, Showstudio, i-D and Dazed & Confused, and has even shot a 5 page spread for Glamour Italia!

At 86, Daphne Selfe is considered to be the world's oldest supermodel! She has always been a model but got into high fashion after being signed on by the Models 1 agency in 1998. She has since worked with Dolce & Gabbana, Tata-Naka, Michiko Koshino, Vogue, Vanity Fair, and Harper's Bazaar. Age really IS just a number!

4. Rick Genest Aka the Zombie Boy

Shaun Ross is the world's first male African American albino model. He has appeared in British GQ, Italian Vogue, i-D Magazine, Paper Magazine and Another Man. He has also modeled for Alexander McQueen and Givenchy! And let's not forget, he was also seen in Lana Del Rey's Tropico and Beyoncé's "Pretty Hurts" video. Impressive!

You probably know (and love) her for her #effyourbeautystandards Instagram movement. Did you know that she is the largest plus-size model to be signed on by a mainstream modeling agency? Tess has worked with David LaChapelle, Benefit, been featured in Italian Vogue and continues to inspire her 850,000 followers on Instagram every single day!

Moffy created quite the buzz when she appeared in POP magazine. In fact, the buzz was so big, that she actually got signed on by Storm Models!

The beautiful Jade Willoughby is one of three Native models who’ve made their mark in the fashion industry. After signing with Wilhelmina Models, she went on to walk in New York Fashion Week in 2014 and has appeared in quite a few editorials and campaigns since.

Erika Linder is known for her striking androgynous looks and the fact that she models as both a man and a woman. She has appeared in ads for Crocker by JC Jeans Company (as both the male and female model), Harper's Bazaar China, a Tom Ford beauty campaign and Katy Perry's lyric video for her song "Unconditionally".

Casey Legler is a former Olympic swimmer and the first woman to work exclusively as a male model!

Lea T is the world's first openly transgender model and is best known for her appearance in Givenchy shows. She has since posed for French Vogue, Hercules Magazine, Interview Magazine, Cover Magazine, and Love Magazine. She is also the face of Redken!

Alex Minsky may have lost part of his right leg (and almost died) while he was serving as a Marine in Afghanistan, but that didn't stop this handsome and determined hottie from turning his life around. He has appeared in GQ, is a favorite among many gay men, and was featured in an ad campaign for The Hunger Games: Mockingjay Part 1.

Jillian is a fashion blogger with cerebral palsy and spastic muscular dystrophy. She originally applied to Diesel's casting call as a joke, but ended up actually being selected for the campaign! She has since been booked to model for Nordstrom and has been signed on by Red Models.

Like Shaun Ross, Diandra is also an albino African American model. She has worked for Culture Magazine, West End and Glamour and has also walked the runway for Vivienne Westwood and appeared in Kanye West's "Power" video.

And finally...meet the inspiration behind this post, 18 year old Madeline Stuart, who may have Down syndrome but hasn't in any way let that affect her spirit and her dream to one day become a model. We wish her all the luck in the world!!!