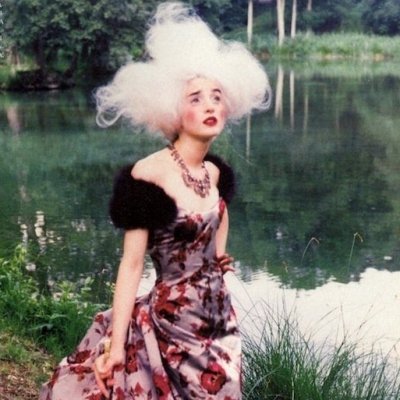 There are trends that exist today, like those really clumpy shoes that are popular at the moment - which I'll never see the appeal of - that seem faintly ridiculous, and this is true of most (if not all) historical fashion trends. They're so popular but not, in any conventional sense of the word, nice to look at or elegant. But weird fashion and beauty trends have always existed – they used to be even more extreme than they are now and, what's more, the extreme used to be the norm. To me, the fashion of a time is a unique insight into what the wider world was probably like; it was dictated by class, social conventions, gender roles, places – and fashion brings those people in history alive much more than facts and events can. If you think we have a rough time of things now, take a look at these weird historical fashion trends.

When you think of strange historical fashion trends, the huge, powdered wigs we often see in paintings, cartoons and films are probably the first thing to come to your mind. This actually started when Louis XIII of France started to go bald – he used the wig to cover it up and what the King did, everyone else did. The wigs were so huge and ornate that they often had to sleep in them and they were seldom washed, meaning the wearers often carried live moths and even mice along with them!

Have you ever heard of ‘lotus feet’? I learnt about this during my history degree, and it’s both fascinating and horrifying. Originating in China around the 10th or 11th century, the feet of young girls were painfully bound to prevent further growth. Tiny feet were seen as beautiful, and the aim was to make them as small as possible – toes were bent under the foot, and then pressed downwards and into the sole of the foot until they broke. These bones would often stay broken for years, and were prone to re-breaking repeatedly. Waxing doesn’t seem so horrible now, does it?!

Have you ever noticed that women in paintings from the past, particularly during the Renaissance Era, tended to have particularly high foreheads? Well, a high and wide forehead was seen as beautiful during that time, so upper-class women who weren’t naturally blessed in that department plucked their hairlines so that they appeared to start further up. Seems strange when we think of the horror a receding hairline is met with today...

Along with the high-forehead trend, it also became fashionable for women to pluck their eyebrows – however, it wasn't the gentle shaping we do today. Throughout the 15th century, women plucked out all of their eyebrows. Kind of like a high-fashion photoshoot in Vogue, except this was every day and probably required a lot of time and effort.

Popular in the 15th, 16th and 17th centuries, chopines were high platform shoes worn by courtesans and patrician women. Originally intended to serve a practical purpose –keeping the wearer elevated above the muck of the street –

The corsets we know of today tend to look quite similar, but their purpose is definitely just aesthetic. Back way back when, women spent their days tightly laced into corsets made from bone, often passing out because of how restricted their breathing was. There are still some women who do this today, training their waists to become as small as possible.

Do you remember learning about the Ancient Egyptians when you were at school? Remember how, in every painting, they wore thick black eye make-up? Whilst lots of women today are fans of the 'smoky eye,' this jet-black eyeliner was worn by men and women alike. It was actually used to serve a practical purpose – the black make-up helped to reduce the glare from the strong desert sunlight.

There are so many more weird and wonderful trends I could have included on this list, and it's a fascinating part of history. We've always used fashion as a way to express ourselves – where we come from, where we'd like to be going and as a creative outlet. It's cool to imagine this throughout history –some things never change. What's the weirdest trend you've ever come across?