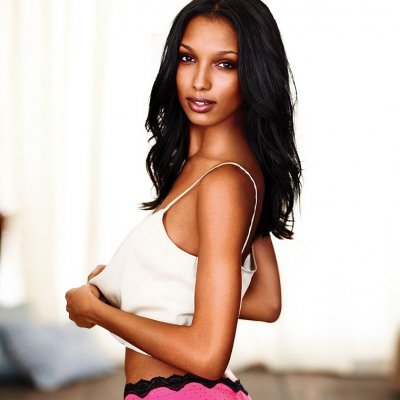 Statuesque Elsa, 26, has quit her professional basketball career to focus on modeling full-time and has been rewarded with her angel wings. No newcomer to VS, Elsa has already worked with Candice Swanepoel in the brand's lingerie campaign. She has worked with Dolce & Gabbana, Dior, H&M, Ungaro, and Guess.

Real name Monika, 21, is a model from Poland and was discovered in 2007 at a casting. She debuted at New York Fashion Week when she was just 15 years old. It was only a matter of time before she became one of the most coveted walkers on the runway and she has worked with Alexander Wang, Valentino, Chanel, and more.

Jasmine, 24, started modeling in front of Bruce Weber's lens for an issue of the Abercrombie & Fitch catalog. Her childhood was quite athletic; she practiced gymnastics for almost 14 years and ended up on her high school volleyball team. Her Ugg boots and GAP campaigns made her popular and gave her the chance to walk the runways of Marc Jacobs, Tom Ford, and Dolce & Gabbana.

Kate, 25, is a new Victoria's Secret model who was a Miss Russia contestant back in 2012. This stunner has a bachelor's degree in marketing and is an accomplished ballroom dancer as well.

Romee, 19, is a Dutch model. She was the newcomer at the VS fashion show in 2011, but now she will be a permanent face in these shows. Some of her campaigns have included Badgley Mischka, Alexander McQueen, Calvin Klein, Isabel Marant, Balmain, Michael Kors, Jil Sander, and Yves Saint Laurent. She loves Ballet Beautiful, SLT, boxing, and Pilates.

Martha, 26, was discovered in a modeling competition in North Carolina. She has made more than 180 catwalk appearances and has walked the runways for Dolce & Gabbana, Chanel, and Prada. She loves cooking and spending time with her friends, Karlie Kloss and Taylor Swift.

Sara, 23, was the first-ever Portuguese model to find a place in the 2014 Sports Illustrated Swimsuit Issue. The Portuguese Best Female Model winner has all the features to be a staple face in the Victoria's Secret family. She loves violin and is a brown belt in karate.

Stella, 24, is an Irish beauty with a transfixing pout. Born and raised in Belgium until the age of 13, she moved to Australia and then New Zealand. Sighted at Otago University, she has walked for Jeremy Scott, Marc Jacobs, and other big names in the industry. She is in love with hiking, racket sports, and travel.

Taylor, 19, has modeled for Rosa Cha and H&M and is now a part of the Victoria's Secret family. Jim Jordan, an agent plus photographer, spotted the Colorado-native in a horse ranch. She likes snowboarding, reading, music, and practicing yoga.

The 10 new Victoria’s Secret Angels join Lily Aldridge, Alessandra Ambrosio, Adriana Lima, Behati Prinsloo, and Candice Swanepoel and form the largest group of contract models for VS ever. (Karlie Kloss and Doutzen Kroes have hung up their wings.)

Do you think someone was left off who should have been given their wings? How about Gigi Hadid?