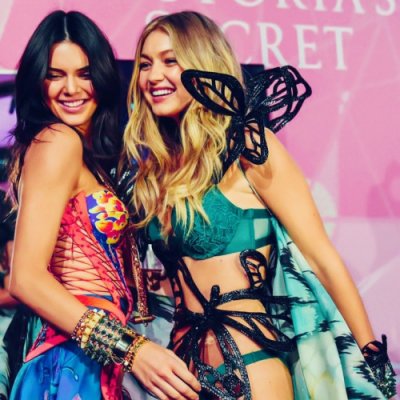 The Victoria's Secret fashion show just took place, and while a lot of people like to boycott the fashion show because they don’t like to promote women with such skinny frames, I think it’s such an empowering thing to watch. These women are all best friends and for one night all eyes are on them as they strut down the runway together. Plus, remember that most of these women were born with long legs and thin frames—so don’t be too hard on yourself if you feel like you don’t measure up! Here’s what we loved from this year's show...

Kendall Jenner walked her first Victoria’s Secret Fashion Show Runway this year, and all eyes were definitely on her! As expected, she absolutely killed it!

Gigi Hadid has easily become one of the most famous models in the world this year, so of course she walked the Victoria’s Secret Fashion Show Runway as well! Just like her best friend Kendall, it was Gigi’s first runway, and she was amazing!

There’s just something so powerful about watching women walk down the runway full of confidence with giant wings completely taking over the entire runway.

Is Lily Aldridge a real human being? She is a mother (to an adorable 3-year-old girl named Dixie) and she was bestowed the biggest honor of the night, the honor of wearing the Fantasy Bra. It’s so impressive to see a woman not let motherhood hinder her career, especially when Lily is in a career that’s almost completely dictated by what your body looks like!

I don’t know about you, but I was super excited to see Selena Gomez perform Good For You while some of her best friends rocked the runway next to her. What a fun moment for friends—I know that I would be so excited to do something so fun with my friends!

Just like Selena Gomez, The Weeknd has some of the biggest songs of the year, and they’re all jams in my book. It was so much fun to watch him sing 'In The Night' and 'Can't Feel My Face', and it was even more exciting to see all of the models dance to his latest and greatest hits!

You may have been super excited for Rihanna’s performance (I know that I was!) but unfortunately she had to cancel at the last minute. But Ellie Goulding filled in for her and did a fabulous job!

What did you enjoy most about the Victoria's Secret fashion show this year? I don’t think that I can pick just one! Let me know in the comments!