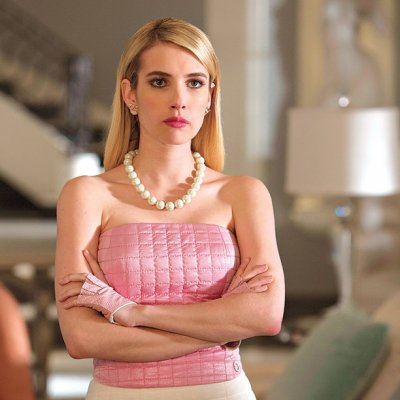 It’s fall, which means that it’s time for new TV. I love watching new TV shows, even if I don’t love them all, because I know that I can always get something out of them—style inspiration. It sounds weird, but even if I hate a show, there’s a pretty good chance that I’ll be inspired by the style of it. I don’t hate any of these shows, but I do love getting style inspiration from them! If you feel the same, check these shows out for the best style inspiration ever!

Although Difficult People has just ended its first series on Hulu, I can’t help but still be obsessed with Julie’s fashion on the show. For a character who’s struggling to make it in show business, her wardrobe surely does not suffer for it. I like to think of it as the perfect mixture of classic New Yorker and Joan Rivers, and it’s to die for.

For the girl who’s looking for an even more chic of classic sorority girl style, look no further than Scream Queens. There are so many different components to this show, but one of the biggest parts of it is the pretty pastel hues that reflect all of the ugliness that is going on behind the scenes of this fictional sorority!

I love when a show cares a little bit more about the style than other TV shows, and this is definitely a show that does just that. I was sold on the style on the show just from the pink dress that the star, Rachel Bloom, wears in all of the ads. Just from the trailer of this show, I’m sure that the fashion is going to be just as amazing as the show seems to be!

This show follows the lives of an entire family, in a way that’s similar to Modern Family (in fact it’s produced by the people behind Modern Family) but this has a little twist. It’s more subdued than Modern Family, and each branch of the family is at a different stage in life. Because of that, you get to see a ton of different styles and fashion choices because all of the people are at different stages in their lives, making it perfect for anyone looking to pull inspiration from a new TV show!

Obviously this show is about so much more than fashion, but because Priyanka Chopra began her career as Miss India, it’s no surprise that she absolutely kills it in everything she wears on this show. Even though a lot of the time she’s wearing her FBI uniform, she still makes you wish that you could rock a simple gray t-shirt as well as she can, and you’re sure to pull some style inspiration from her!

This show takes place in 2065, which means that all of the style on this show is pretty futuristic. While that’s the case for most of the fashion, you’d be surprised by just how influenced by 2015 that it is. It’s like 2015 fashion with a futuristic twist, and if you want to add some futuristic elements to your wardrobe, this is the show to watch for inspiration!

A show starring John Stamos and Josh Peck is not necessarily a show that makes you think of fashion and style, right? Surprisingly, this show is actually pretty good in the style inspiration department. Not only is John Stamos’s wardrobe impressive (Josh Peck’s still leaves something to be desired), but Paget Brewster and Christina Milian’s wardrobes will have you lusting after their wardrobes!

What are your favorite fall shows this year? Are you inspired by any of the fashion choices on those shows? Let me know in the comments!