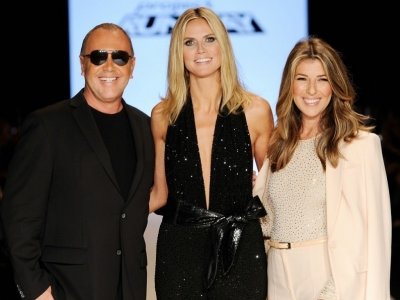 I usually don't pay attention to fashion trends, but I really love Project Runway outfits. For those of you who haven't seen the show, hosts Heidi Klum and Tim Gunn bring a different group of designers from all over the world to New York to compete for the opportunity to start their own line and a lot of other fabulous prizes. They've had 12 seasons so far, one of which was entirely made up of team challenges. Occasionally, they'll bring back notable designers from previous seasons to form an «All-Stars» panel to compete for the title all over again. I don't have the same kind of figure as most of their models, but there are several Project Runway outfits I've seen that I would absolutely love to wear.

This is definitely one of my favorite Project Runway outfits. In this challenge, the designers were asked to create a dress for Marge Simpson. It was supposed to be something she could wear on a date with Homer that would be comfortable and, um, come off easily. The winning design is supposed to be animated on a future episode. I'm not a huge fan of strapless, but I'd wear this in a heartbeat. It's just gorgeous.